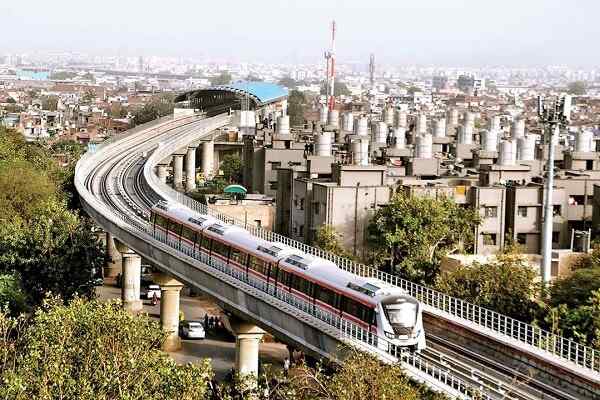 Ahmedabad, India (Metro Rail Today):  In innovation can alter the course of things significantly while paving the way for record-breaking milestones. At the Ahmedabad Underground Metro Project (UG-1), Tunnel Boring Machines (TBM) were launched without using Diaphragm Wall (D-Wall) for the first time, for any Metro project, in India.

This alternate methodology helped to speed up the construction of the Kankaria Metro Station, and, eventually to speed up tunneling for the remaining project.

In the UG-1 project of Ahmedabad Metro, Afcons is constructing two underground stations, twin tunnels of about 3.5km in length in total, a cut and cover section, and a ramp connecting elevated and underground sections.

The first TBM, ready for commissioning, could not be set in motion as the headwall construction came to a standstill due to a delay in handing over of land for Kankaria Station and various other issues. To minimise the delay and speed up execution, the project team adopted a new methodology of TBM passthrough without a D-Wall at Kankaria Station.

In top-down construction methodology, the station box D-Wall is placed before the TBM passthrough, which was not possible at Kankaria Station. This innovative methodology ensured that the delay does not have a domino effect. The station’s width was subsequently increased from 20m to 22m to accommodate the unique TBM manoeuvre.

Explaining the process, Project Manager S Nakkiran said, “The TBMs were launched from launching shaft as tunnelling started for both east-bound and west-bound routes. The tunnelling for both routes was completed smoothly by constructing permanent rings, and the TBMs were then retrieved at Kalupur Station. As far as Kankaria Station was concerned, the D-Wall of the main station box was constructed in a phased manner once the land was handed over in phases."

For the first time in India, this method has been used in a metro project. Previously, it was adopted in Istanbul Metro.

To ensure the smooth functioning of TBM, the team also developed an in-house calibration unit for the earth pressure censor. “Sometimes, the sensors gave a deviated value of earth pressure when the face of the censor was covered by muck. Hence, its calibration was required. However, getting calibration done from the manufacturer every time, or, renting a unit for it was not cost-effective, and it was time-consuming. Therefore, the team developed a calibration unit in-house to address the issue," Nakkiran said.

To expedite work at Kankaria Station, parallel construction was adopted instead of the sequence method. “We could complete the construction of the main station box four months ahead of schedule, and the erection of the Over Track Exhaust (OTE) duct was done five months ahead of schedule. The efforts were also appreciated by the client (Gujarat Metro Rail Corporation)," he added.

Ahmedabad Metro (UG-1) Project is slated for inauguration shortly and Afcons has completed the project without compromising on health and safety parameters. The project has clocked twelve-and-half-million Safe Man Hours.

The site has earned various accolades, including a four-star rating by the National Safety Council of India, and the Safety Innovation Award from The Institute of Engineers (India) after an extensive evaluation of health and safety management at the site. The British Safety Council has also issued an appreciation certificate.