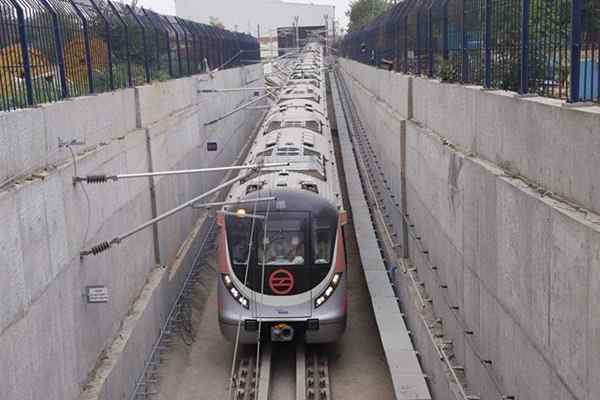 A Tunnel Boring Machine (TBM) broke through this morning at Krishna Park Extension after boring a 1.4-kilometre long tunnel in the presence of the Secretary, Ministry of Housing and Urban Affairs, Government of India & Chairman, DMRC Manoj Joshi; Managing Director, DMRC, Vikas Kumar and other senior officials.
This tunnel breakthrough was achieved using a mammoth 73-metre-long TBM. Two parallel circular tunnels for up and down movement have now been constructed on this stretch, which is part of a 2.2-kilometre-long underground section from Janakpuri West to Keshopur. The work on the other tunnel parallel tunnel on this section was completed in December last year.
The completion of this stretch is a significant achievement for DMRC since this work faced repeated constraints due to the Covid – 19 pandemic. The workforce was retained following all the guidelines, and the work schedule was planned accordingly. On this underground stretch, apart from the twin tunnels, the ramp and the entry/ exit have been completed while about 70 percent of the Krishna Park Extension station has also been completed. Civil work of this particular underground section will be completed by early next year though the entire Janakpuri West – RK Ashram Marg corridor will be ready by September, 2025.
This new tunnel stretch is a continuation of the earlier Magenta line tunnel that was already constructed for the presently operational Botanical Garden – Janakpuri West corridor. The tunnel has been constructed approximately at a depth of 14 to 16 metres. About 2,000 rings have been installed in the tunnel. It has an inner diameter of 5.8 metres. The alignment of the tunnel runs along the Outer ring road and below multi-storied built-up structures.
The tunneling work involved innumerable challenges like shifting of sewer lines at a depth of 8 metres using the micro tunneling method. In addition, due to heavy traffic on the Outer Ring Road, a subway was constructed using the box-pushing method without disturbing the traffic flow.
The tunnel has been built with the proven technology of EPBM (Earth pressure balancing method) with concrete lining made up of precast tunnel rings. The tunnel rings have been cast at the fully mechanized casting yard setup at Mundka. These concrete segments were cured with a steam curing system to achieve early strength.
All necessary safety precautions were taken while constructing the tunnel below the built-up structures by monitoring the ground movements with highly sensitive instruments fixed on the nearby structures. With these measures, it was ensured that there was no settlement anywhere.
As part of the Phase 4 work approved so far, 28.76 kilometres of underground lines will be constructed. The Janakpuri West – RK Ashram Marg corridor will have underground sections of 9.41 kilometres in total.
A TBM is a machine used to excavate tunnels with a circular cross-section through a variety of soil and rock strata. They can be designed to bore through anything from hard rock to sand. TBMs have revolutionized the way tunneling work is done worldwide as tunnels can now be bored without disturbing the buildings and other structures on the surface.
TBMs are especially useful for underground tunneling work in congested urban areas. DMRC has been using TBMs for its tunneling work since Phase 1. In Phase 3, when about 50 kilometres of underground sections were built, about 30 TBMs were pressed into service in the national capital.