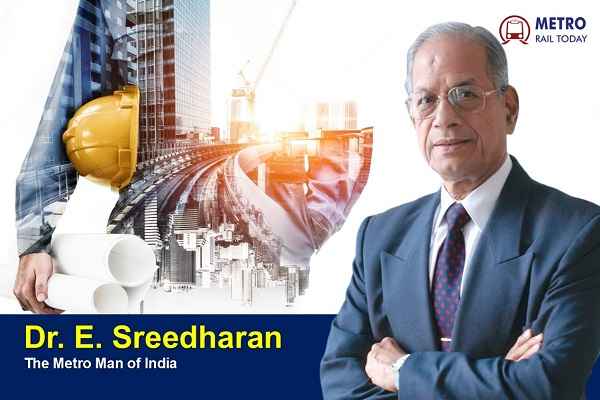 New Delhi, India (Metro Rail Today): Dr. E Sreedharan, popularly known as the Metroman of India, has been conferred the ‘Most Exemplary Urban Infra Leader Award’ for his lifetime contribution and effort to develop smart and advanced rail-based urban mass transit systems (metro railways) in the country. His name was selected by a jury/panel comprising experts from the Rail & Metro sectors for the 2nd Urban Infra Business Leadership Awards 2022.

Due to his old age and health issue, the award was received by Delhi Metro Rail Corporation Ltd (DMRC) on his behalf. The award was given at a grand ceremony - 2nd Urban Infra Business Summit & Awards 2022 hosted by Urban Infra Group on 7th November 2022 at India International Centre, New Delhi, India. The award ceremony was attended by dignitaries from the nodal ministries, government departments, public sector undertakings (PSUs) and industry leaders from the leading multi-national companies engaged in developing major urban infrastructure in India.

"I am grateful to you for choosing me as the “Most Exemplary Urban Infra Leader”, for Life Time Achievement Award, to be conferred on me on 7th Nov 2022. This is indeed a great honor," said Dr. Sreedharan after receiving the award. "Due to my advanced age, I had decided to not attend the award ceremony personally," he added.

Sreedharan is an Indian technocrat from Kerala state. He is credited with changing the face of public transport in India with his leadership in building the urban mass transit systems in various cities of the country. His leadership in building the Konkan Railway and the Delhi Metro is acknowledged globally. Sreedharan was the managing director of the Delhi Metro Rail Corporation (DMRC) between 1995 and 2012.

He has been awarded numerous times for his contributions. He was awarded the Padmashree and Padma Vibhushan by the Government of India in 2001 and 2008 respectively. In 2015, the French government awarded him with the Chevalier de la Légion d'Honneur, considered the highest French order of merit for both civil and military. The TIME magazine named him one of Asia’s Heroes in 2003. In 2021, Sreedharan joined the Bharatiya Janata Party (BJP).

In 1953, Sreedharan joined the Indian Railway Service of Engineers after clearing the Indian Engineering Services conducted by the UPSC. He was posted in the Southern Railway as a Probationary Assistant Engineer in December 1954. He has, over the years, worked on various projects leading different departments. In 1970, he was in charge of the implementation, planning, and design of the Kolkata Metro. Then he joined the Cochin Shipyard, which was undergoing a phase of unproductivity. He was instrumental in leading a turnaround of the shipyard. He then led the Konkan Railway, Delhi Metro, and the Kochi Metro. He was also the chief advisor for the Lucknow Metro. His contributions to the Delhi Metro have been the most notable in his decades-long career.

The Urban Infra Business Leadership Awards are given to corporates and individual leaders in recognition and honor for their extraordinary contribution to developing major infrastructure projects in India through their innovative ideas, products, and services. A total of 41 (9 individuals and 32 corporates) were felicitated with the 2nd Urban Infra Business Leadership awards.

The 1st edition of Urban Infra Business Leadership Awards 2022 was held virtually in 2020 due to the countrywide pandemic.