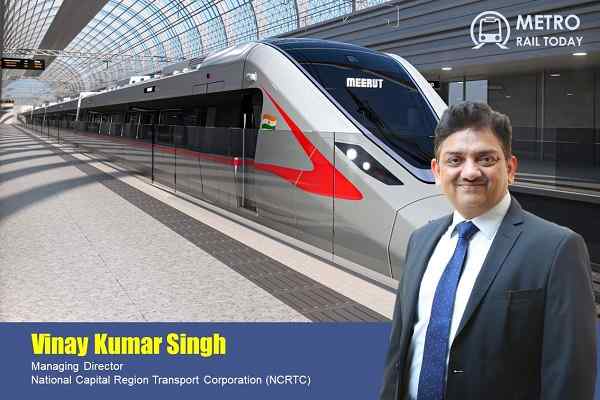 How different will the RRTS be from other forms of existing trains like the Metro or a bullet train?

They will not be much different from Metros as far as station experience is concerned. We will have 100 percent screen doors in platforms because these trains are very fast. Bombardier train sets’ acceleration speed will be very high compared to Metros. They will have 40 percent higher acceleration compared to bullet trains, because bullet train stations will have longer distances. Here we have to take it very fast because every 6 km we have one station.

We have commuter-centric thinking. If I go and build stations anywhere, it will not be helpful to the user. Even if it is an additional burden, we will not compromise on the ease of travelling. Ultimately, all systems will come together and be interlinked.

How important is RRTS to multimodal transport?

We have added Metros and also a large number of airports in the last 20 years. Train speeds are also increasing. Unfortunately, in terms of intercity travel, we could not do much. If you want to travel from Meerut to Delhi, you have to rely on taxis or buses. Things are highly unpredictable for a traveller. All this creates a miserable situation for intercity travel. The situation is almost the same when it comes to connectivity with other cities. With RRTS, the focus will be on multimodal integration. We are touching each and every mode of transport wherever possible — Metro, airport, rail station (Nizamuddin), bus stations. A person, who used to take three to four hours in private transport to the airport, will be able to reach there in 70 minutes. The station will be in the heart of the city, too.

Has Covid-19 affected the commissioning deadline of your first corridor between Delhi and Meerut?

When you execute a project, there are many aspects that have to be worked on simultaneously. It is a big jigsaw. The 82 km from Delhi to Meerut itself is huge. The biggest challenge in this kind of project is getting the approvals from various authorities. Besides, we touch densely populated areas every 500 metres, so there are landowners, too. Everywhere we have to de-risk the people. De-risking means you take approvals in time, start early. We kept working during lockdown also.

The total project cost of the Delhi-Meerut corridor is around Rs 30,000 crore, including project finance and escalation. Work will be done in four stages now: First 20 km, and then every six months 20 km each. The first phase is expected to be commissioned by March 2023 (Sahibabad to Duhai). In spite of Covid-19 or work being stopped last winter due to pollution, we are confident about meeting the deadline.

The land is now with us for the main tracts. We are working at full stretch, except for some portions in Meerut and Delhi. We are doing pre-construction work like clearing cables, underground lines and high-tension lines.

There were reports about the cancellation of a tender won by the Shanghai Tunnel Engineering Company for an underground stretch on the route. Has the contract been given to the L2 bidder?

The bid for the said package is under evaluation and is yet to be finalised. As a policy, NCRTC does not comment on any bid till the evaluation is complete.

What is the status of other corridors that you had planned?

Out of eight corridors planned by the NCR Planning Board in its transport plan for 2032, three were taken as priority corridors back in 2006. These three, Delhi-Meerut, Delhi-Panipat and Delhi-Alwar, are already under implementation. The first is Delhi-Meerut, which has been sanctioned and where work is on in full swing. The second is the Delhi-Alwar RRTS corridor. For this, we prepared a detailed project report, which has been approved by all three states (Delhi, Haryana and Rajasthan). Now, it is with the Central government for Cabinet approval. However, we are doing some work like road widening, tree cutting and pre-construction activities, for which Haryana has already given us Rs 100 crore. Around Rs 36,000 crore will go into this for covering 106 km. The Delhi-Panipat route will see an investment of Rs 30,000 crore. Our board has approved a detailed project report for this and it is with the governments of Delhi and Haryana.