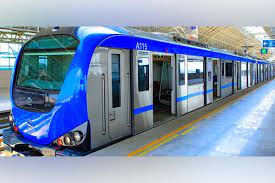 In February 2009, Hyderabad-based Soma Enterprise was awarded a ₹199.2 crore contract for the construction of a 4.5 kilometres long viaduct along the Inner Ring Road. The construction started on 10 June 2009 with the piling work for the elevated viaduct between Koyambedu and Ashok Nagar stretch